I am an ongoing patient of Dr. Kappel for whom I am deeply grateful as she was the only Dermatologist to have been able to diagnose a cosmetically disfiguring and progressive condition I had in 2016!  I had access to other dermatologists’ input and care and I recognize that Dr. Kappel is unique in her stellar education and training to have been able to help me.  The photos I enclosed below I hope will convey the devastation I was feeling after two other dermatologists could not help me . . .

Just before Valentine’s Day in 2016 I was taking a photo of an unrelated bruise under my left eye, when I noticed some lesions developing on my face [see photo from Feb 10].

The lesions spread rapidly from my face to neck and appeared on my hip and left forearm as well.  The lesions were not painful but were intensely red, with a raised texture.  I myself tried antifungals, antibiotics online, steroids, etc. and yet the lesions were spreading.

I visited a dermatologist in the town I lived in at the time and he took biopsies from the lesions on my extremities but the pathology report was uninformative and all he could provide me was sympathy !!  [crying face]

I asked a dermatologist I worked with for an opinion and he guessed I had an autoimmune condition. [oh no!].

For two months I ate nothing but organic chicken and organic broccoli thinking that eating healthier with items which are not known to be “allergic” or stimulatory to the immune system would help.  It did not; I only became hungrier.

I was settling into a new identity of having an incurable autoimmune condition that was disfiguring and spreading down my body.   [A more distressed crying face here]

On Friday April 1, 2016 I had reason to drive from Southern California to Sacramento as it was the day before my reserve weekend at Travis AFB so I made an appointment to see Dr. Kappel at her East Sacramento location as I knew Dr. Kappel to be a stellar dermatologist who I had been seeing when I lived in Sacramento.  Dr. Kappel took two biopsies from my left forehead.

The initial pathology report was similar to previous pathology reports from my local dermatologist, non-diagnostic.   However, given Dr Kappel’s stellar training, she did not stop with the ordinary tests and knew what specific tests to ask for and she subsequently had several conversations with the pathologist on my behalf to make these arrangements.

Dr Kappel called me from her cell phone shortly thereafter with the diagnosis, “Majocchi Granuloma”.  I  had no predisposing factors or clues to help her to this diagnosis.

She put me on a prolonged course of to eradicate it.

Now that Dr. Kappel has moved to Newport Beach and I have moved to Tehachapi CA I gladly make the long drive to continue my unrelated cosmetic care!

[By the way, the brown spots in the photos are now gone due to her Obaji care]

Looking for Something Specific? 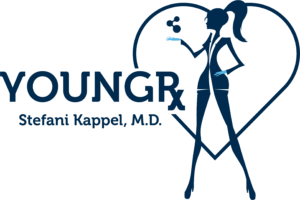